When we think of Singapore, we think big cities, big buildings, and big personalities. But we often forget about the smaller alcoves nestled throughout the destination, with all their unique characters and quirks.

Here is the lowdown on all the hot neighbourhood spots you should be checking out next time you head to Singapore.

The Bras Basah and Bugis precinct is where you can visit for a slice of Singapore’s rich heritage and top museums. Bugis Street is today a covered market with 600 stalls selling cheap souvenirs, street food and fashion, while Bugis Junction across the road has four floors of shopping, food courts and restaurants, a movie theatre and more.

Many museums are clustered around the Bras Basah arts district including the National Museum of Singapore, the Singapore Art Museum and the Peranakan Museum.  Continue along Waterloo Street and you will come across the Kwan Im Thong Hood Cho Temple, a Buddhist temple used as a refuge for the sick during WWII, and right next to it, Sri Krishnan Temple which was built in 1870 as a shrine for the Hindu god, Lord Krishna.

Bustling with a mix of old and new, Chinatown is filled with traditional shops, markets, lifestyle stores and cafes. If you are a foodie, don’t miss the fully pedestrianized Chinatown Food Street, where you can dine alfresco from hawker stalls selling a variety of local foods.

If that’s not enough food to keep you satisfied, hop across the road to the popular Maxwell Food Centre, with over 100 stalls, including Tian Tian Chicken Rice (stall 10), considered to be some of Singapore’s best.  While you will find fascinating Chinese heritage sites including the Buddha Tooth Relic Temple and Thian Hock Keng Temple, there are also historical gems, temples and mosques dedicated to Indian, Malay and Arab communities.

Best of all, there is FREE Wi-Fi throughout Chinatown.

Just a few minutes from Orchard Road and near the Botanic Gardens, Dempsey Hill served as British army barracks in colonial times and more recently as the base for the local military. However these days Dempsey Hill plays host to some of the city’s top restaurants, gourmet shops and art galleries in a historic space with an appealing laid-back vibe.

Home to the Malay aristocracy before the British settlement, this area has an eclectic blend of history, culture and a trendy lifestyle scene. The majestic Sultan Mosque, found on Muscat Street, is surrounded by streets lined with shophouses, selling carpets and textiles, as well as trendy cafes, boutiques and drinking establishments.

A must visit is Haji Lane where you will find collections of local Singaporean designer labels, vintage clothing stores and vibrant bars and cafes. The combination of the modern and the historic make Kampong Glam one of a kind.

This area is easily identified by its unique pre-war architecture where colourful two-storey shophouses line the streets with Peranakan touches of handcrafted ceramic tiles and intricate motifs. The Katong & Joo Chiat district is the perfect example of Singapore’s melting pot of cultures.

From Malay and Indian to Chinese and Peranakan (descendants of the 17th Century Straits Chinese immigrants who married into the local communities) cultures. It is also known for its good food, your choices are endless here; explore cool cafes right next to old-world coffeeshops selling the famous Katong Laksa all just a 10 minute drive from the city.

As you walk down Serangoon Road and the neighbouring streets, you will find a bustling, chaotic, colourful and busy region of Little India. Explore the mix of stunning Hindu temples, with ornate facades with intricate carvings of Hindi deities, quirky art galleries and boutique hotels alongside these historic sites.

A must visit is the 24-hour Mustafa Centre shopping complex, and the Tekka Centre that has been a go to for centuries with a hawker centre, wet market, tailor shops and Indian fashion boutiques. While in the neighbourhood, don’t miss out on the opportunity to eat some spectacular South Indian cuisine.

Identified as an entertainment hub, the Marina Bay is a must visit neighbourhood for any visitor to Singapore. Here you can marvel at the many architectural icons that dot the skyline including Marina Bay Sands, or take in the striking lotus-shaped ArtScience Museum.

To continue your marvelling head over to the 101-hectare Gardens by the Bay, where you can take in the views of the Gardens from the walkway between two of the 16 storey high SuperTree vertical gardens; then escape from the heat at the cooled conservatories, the Flower Dome and the Cloud Forest; or let the kids play among the water features at the Children’s Garden.

For even more spectacular views of the city skyline, take a ride on the Singapore and follow with dinner at the recreated 1960’s themed hawker centre, Singapore Food Trail or at the open air hawker centre Makansutra Gluttons Bay.

Just 15 minutes from the city centre and accessible via a walkway, Singapore’s only cable car or the Sentosa Express Monorail, Sentosa is home to non-stop fun, beaches, restaurants, clubs and accommodation.

Resorts World Sentosa is home to numerous attractions including Universal Studios, Marine Life Park while other attractions on Sentosa include Sentosa Luge, a surfing experience at Wave House, and the indoor skydiving centre iFly.

For the less adventurous types who prefer to lie by the beach, you can visit one of the three beaches or the different beach clubs dotting the sand. Sentosa really is a playground for all.

One of the oldest housing estates in Singapore, Tiong Bahru has a mix of quirky shophouses, public housing flats, Art Deco architecture and a range of food options. It’s a charming neighbourhood that’s long drawn locals from across the island thanks to the delicious street food in Tiong Bahru Food Centre.

Tiong Bahru is the perfect neighbourhood for wandering during the day and visiting the many hip cafes and restaurants found in the area. 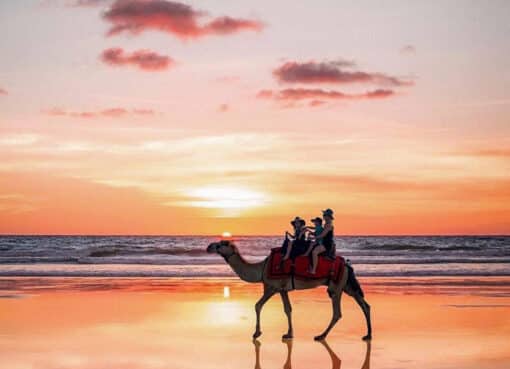 Discover Australia with these experiential packages